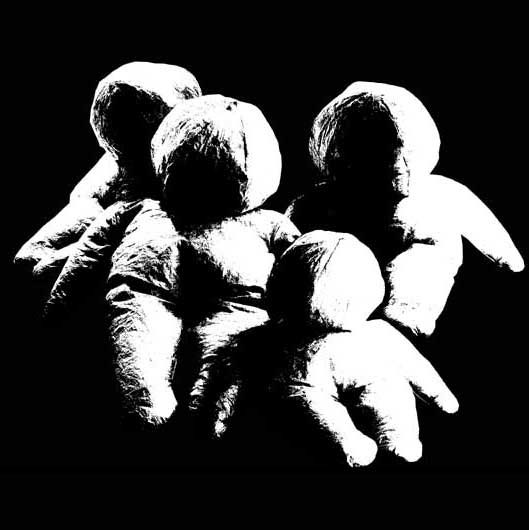 Armé Des Enfants is a social art project orchestrated by artist Jonathan Haner. In 2003, Jonathan created the first doll to be used as a photo model for an autobiographical book of rhymes. In the context of the book, the doll was a symbolic representation of an invisible damage or trauma which the subject accumulated one harrowing rhyme after the other. The doll was featureless, made of white plastic and had an over-sized head. Like the elephant in the room, the slumped and pathetic figure went more or less unnoticed, yet affected whatever space it inhabited.

Between 2003 and 2009, the doll (a.k.a. “Big Baby”) was used in various exhibitions, theatre performances, and protests. The five meter long doll disappeared after the police broke up a demonstration over affordable housing in Lund, Sweden. There were rumors that some young activists were using it as a bed.

In 2009, Jonathan and his partner, Teresa Holmberg, sewed together a 23 meter version of the doll to be exhibited in Grand Rapids, MI, USA. ‘La Grande Bebe’ was packed in shipping containers and sent to the states to be erected against a building by filling the empty skin with semi truck loads of styrofoam blocks and airbags. In the same shipping containers were approximately 20 waist-height dolls which were intended to be used in small, public installations during the course of the two week long event. Jonathan, together with a handful of photographer/artist friends, began going out on ‘bebe-capers.’ It’s still unclear whether it was the deviant nature of the group, or simply the spectacle of adults carrying around big dolls which was the impetus to gain access to increasingly daring locations. The bebes went from abandoned factories, to courtrooms, to the helipad of the Marriott Hotel which overlooked the city. Besides being a lot of fun, these bebe-capers resulted in many interesting photographs which were then shared with friends via social media, gaining interest and attracting participants from outside of the original group. These smaller dolls were created with a zipper in the back, making it easy to remove the stuffing and mail to the next creative person who wanted to play.

After returning home to Sweden, Jonathan remotely kept track of where the bebes were located and made sure that the resulting photos would end up in his collection. The original 20 bebes were fairly easy to follow because they were being shared primarily between friends of friends. Things got more complicated (and interesting) when the demand for bebes became larger than the number of existing dolls. So, in his spare time, Jonathan began producing more bebes. At first he sewed them per request, but this soon led to a sizable production which ended up being shipped all over the world. The next logical step was to create a website to act as a centralized hub where people could deposit photos and notify where the bebes would be sent to next. This went on for the next five years, and as of September 2015, is still underway.

Out of the initial cathartic need to create an iconic bebe figure came the unexpected journey of the Armé Des Enfants. Since its inception, the original meaning of the bebe has changed, or rather, made itself clear. The bebe is just human enough, just alien enough, and just generic enough that it becomes a blank canvas to insert, project, absorb, or juxtapose any meaning the photographer is skilled enough to convey. This book represents a very small selection from the many thousands of images accrued over a five year period. It is a mix of Jonathan’s own photos and the ones that were sent to him. All of the contributors, both professional and amateur, gave freely of their photographs to create this strange and wonderful compilation of images.